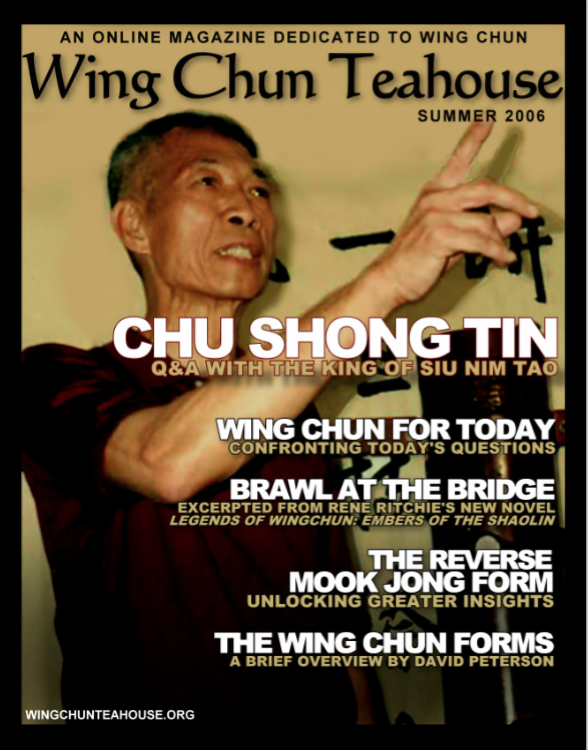 My master Ip Man first started teaching Wing Chun in Hong Kong at the Restaurant Workers Union Association. At the time I was the secretary of the association, so Master Ip and I had many opportunities to be together. Before I became interested in Wing Chun, I often overheard Master Ip explaining his Wing Chun theories in his classes. Gradually he sparked my interest in the art. It so happened that I had great interest in physics and mechanics; I enjoyed his theories on body structure and power development methods very much. Through my careful analysis, I was convinced that Master Ip's art was flawless and very advanced. Finally, I decided to follow Master Ip and became his student.

Like every beginner in class, I started my journey with Siu Nim Tao , even though I had already familiarized myself with the form as an observer. It took me little effort to completely learn the basic movements. I then began to wonder about the essence of the form, besides the hand movements. I went to Master Ip and inquired about the meaning of Siu Nim Tao, especially the non-combative tone in the name. Master Ip replied: "This is about ‘Lop Nim’ - to establish an idea in the mind". I am sure most of my peers have also heard about this term. Master Ip also added that it required prolonged practice of this form to truly master the essence of 'Lop Nim'.

This hidden meaning of 'Lop Nim' really caught my interest. I spent much time analyzing its nature, but could still not grasp the concept. Therefore I decided to drop all my thoughts and simply practiced Siu Nim Tao whenever I could, day and night. After a long time, I began to see the connection between 'Lop Nim' and the form. I suddenly felt great joy in my Wing Chun training, which fueled my interest in the art further. I became obsessed with the art. Gradually I discovered some powerful but hidden forces within each Siu Nim Tao movement. All the movements are indeed able to deliver indestructible power, yet they look very soft and graceful. At that moment, the concept of 'Lop Nim' became extremely enlightening and inspiring to me. I finally understood the reason behind it.

I summarize this hidden power as a kind of 'Nim Lik' (the force of an idea; or mind/intent force, where Nim is the same idea/intent as in Nim Tao). In essence, Siu Nim Tao has two major points: 'Nim Lik' and "structure".

1. Nim Lik (force of idea/intent): it stabilizes all Wing Chun movements to form a springy and dynamic combination of body structures. It makes Wing Chun body structure able to sustain great pressure and produce rebound energy. Although there are common terms such as 'Nim Lik', ‘Qi Gong’, ‘Noi Gong’ (internal martial art), or supernatural abilities that are being perceived as some kind of unusual power, here I would only illustrate the concept behind 'Nim Lik' (force of idea/intent). 'Nim Lik' is the power of a highly focused mind. It helps one bring forth ‘Qi’ flow into every part of the body. Everyone should have this kind of power. However, without training, it is very difficult to focus thoughts. Siu Nim Tao is a great tool to invoke mind focus power. If properly practiced, one can deliver this kind of power at will in every instance. The mind can stay focused even when the structure is adjusting or moving at high speed. So to achieve 'Nim Lik' is the goal of Siu Nim Tao.

Let's look at a simple example: if a healthy person falls down from a 6-7ft tall platform unprepared, even if they land with both feet, it’s likely that they’ll be injured. However, if the person is mentally prepared for the fall, their feet will automatically recoil and absorb the impact. Also, they can only have this reflex if their feet are relaxed. This is a unique attribute of human muscle in its relaxed state. The springy force on the feet that help the person land safely is a direct result of relax muscles and 'Nim Lik'.

note: according to contemporary scientific findings; when human muscles are in relaxed state and are moving at steady speed, they can sustain greater pressure than when they are tensed up (using force). It is so amazing that our Wing Chun ancestor Ng Mui was able to make use of this scientific method to design our Siu Nim Tao hundreds of years ago

2. Structure: Yee Gee Kim Yang Ma (the Wing Chun stance) allows one to project all energy forward towards the target. Tai Gung (the soft upward pull of the muscles around the anus area) helps unite the body and stance. It also helps relax the leg muscles while being in the stance; thus the whole body reaches a highly alert and ready state. These are the necessary conditions to produce 'Nim Lik' and must be maintained firmly.

The core techniques of Siu Nim Tao - Tan / Bong / Fook -- are indeed subtle uses of body mechanics. These three techniques take the shape of arcs or bows. As we extend the arc shape further, Tan / Bong / Fook become hemispheres. As we all know, an arc or spherical-shaped object can sustain strong impact. It can also transfer or deflect energy dynamically when spinning. A wheel can accelerate faster than objects of other shapes (e.g. square, triangle). Each movement in Siu Nim Tao, inspired by this efficient arc-like structure, and when combined with 'Nim Lik', becomes extremely powerful defensive and offensive techniques. In addition, practitioners must not employ brute muscle strength. Siu Nim Tao training should never be tiring. To be proficient in this foundation, all movements should be done with the mind rather than strength.

Many Wing Chun practitioners like to impose their techniques into frozen and static postures. Many believe that Bong Sau should be done at a certain height or angle, or criticize others for not complying to their artificial standards. Some may call this style traditionalist; that style reformist; and on and on. In fact, movements in Siu Nim Tao are not named as if they were static postures. For example, when rolling up Tan Sau into Bong Sau, it is the course of this rolling movement that makes up the Bong Sau technique; the function of Bong Sau exists in its circular motion. Similarly, all other techniques in Siu Nim Tao employ circular movements in various directions.

It is a popular belief that Bong Sau is a passive technique: practitioners only use Bong Sau to deflect incoming forces. This would apply to the scenario where a statically posted Bong Sau is being used to block attacks. However, this explanation lacks an understanding of Bong Sau. In my experience, Bong Sau can deliver enormous offensive power. Indeed, it is a very aggressive and penetrating technique due to its circular nature.

Finally, I suggest that all fellow Wing Chun practitioners look carefully into each technique of Siu Nim Tao. Discover the subtle circular movements in each of them. Practice with mind focus and steady speed. Use the mind to command each technique rather than using muscle tension. I am sure you will gradually find great joy and satisfaction in your Siu Nim Tao training!