An interview with Ip Man 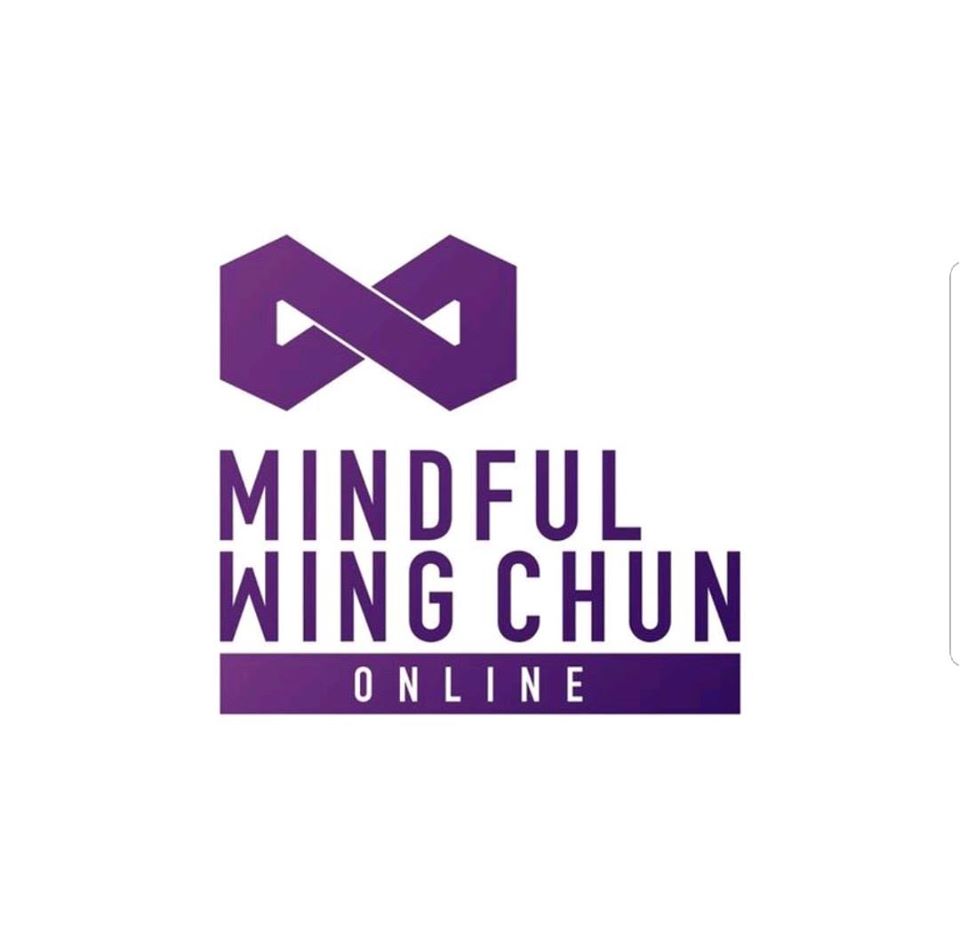 Here is a translation of an original interview with Grandmaster Ip Man in the magazine “New Martial Hero“, and it is one of only two ever-published interviews with the famous Wing Chun Grandmaster.

Grandmaster Ip was a Foshan native, and when he was very young, he was quite weak. Because of this, his parents sent him to learn Wing Chun from Chan Wah Shun, the most outstanding student of the famous Dr. Leung Jan. 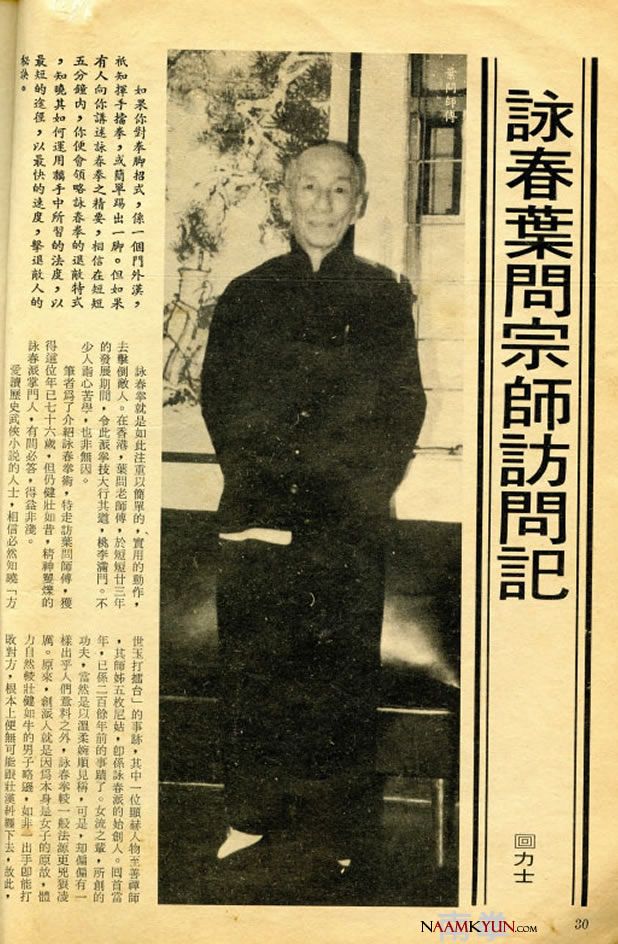 When Grandmaster Ip described his past, he did so with great warmth.

Ip Man: This nickname does not represent my instructor’s character. Other than ‘Wah the Money Changer’, he had also a less graceful nickname. ‘Ngau-Chin Wah’ (Wah the Bull). He was the head student of Dr Leung Jan.

New Martial Hero: This name indicates that Wah was a very bad tempered person who liked fighting all the time, right? How many students did Wah admit? How were you ranked amongst your kung fu brothers?

Ip Man: Including me, Wah only admitted 16 students since opening his Wing Chun school. I was 11 years old when I became his student during his latter years.

Ip Man, smiling: You’re right. When I learnt under Wah, he was already 70. He was a bit weak at that time. However, he still corrected my mistakes with great patience. Furthermore, he also told his other students to teach me. As a result, my techniques improved at high speed.

New Martial Hero: It’s a good question. Let me tell you why. In olden days, people were very strict concerning the teacher/student relationship. Before they admitted a student, they had to know the character of this would-be student very clearly. This is what is called ‘to choose a right student to teach’. Secondly, it also depended on whether the student could afford to pay his school fees or not.

Grandmaster Ip stopped for a while. He then talked in a rather low tone: The fact is, not too many people could afford to pay for such a high school fee. For example: at the time I paid, the red packet for the ‘Student-admitting Ceremony’ had to contain 20 taels of silver. And I had to pay 8 taels of silver each month as my school fee.

New Martial Hero: How much was 20 taels of silver worth, in terms of your living standards?

Ip Man, after thinking for a while: For 20 taels of silver you could marry a wife, say if you did it economically. Also, with no more than 1 and a half taels of silver you could buy 1 picul of rice. That was why, at that time, most of the people who learnt Kung Fu were rich people. These people could leave their jobs and live in the old temples in deep mountains for training. It is not the same as today when people can easily learn Kung Fu anywhere.

New Martial Hero: After the death of Wah, you left Foshan and came to Hong Kong to study in St. Stephens’s College. Did you learn Wing Chun Kung Fu again when you were in Hong Kong?”

Ip Man, smiling: “Of course I did! And I can say that it was because of a highly proficient Wing Chun expert whom I met that I learnt the most advanced Wing Chun techniques.

New Martial Hero: Who was that highly proficient expert?

Ip Man: It was Leung Bik, the eldest son of Dr. Leung Jan. The story of how I came to meet my teacher Leung Bik was really quite dramatic. It’s a long story.

But after repeated requests by the writer, Ip Man started telling the following story in detail.

At the time Grandmaster Ip left Foshan to go to study in Hong Kong, he was already very skilled in the basic Wing Chun fighting techniques. He always fought with his classmates at the school. Although Ip Man was not tall, he was very skillful in fighting techniques. Therefore, he could defeat all his classmates, even those that were much taller and stronger than he. For this reason, he became arrogant for he believed that nobody could match him.

After six months, one of Ip Man’s classmates, Lai, whose father ran a big silk company named “Kung Hang Silk Company” in Jervois Street of Sheung Wan, told Ip that there was a friend of his father who is living in their house. He was in his 50s, and this man knew some Kung Fu techniques. He offered a friendly spar with Ip Man.

At that time Ip had never been defeated, and so he wasted no time in accepting the challenge. Lai made an appointment to introduce them to each other on one Sunday afternoon.

On that Sunday, Ip Man went to the house of his classmate. After being introduced to this middle-aged man, Ip looked at him appraisingly. To Ip’s eyes, he looked more like a typical slim-gentleman than someone who really knew Kung Fu.

After a short time, Ip Man frankly challenged the man to a sparring match.

With a smile, the middle-aged man said: “Well, Ip Man, so you are interested in doing some sparring with me. Before your fight me, I can tell you not to worry about me. All you need to do is attack me to any part of my body with your full strength and that’s all!”

On hearing this, the arrogant Ip Man, though apparently still unruffled, was actually so mad that all he wanted to do was to beat this man up!

No sooner did the middle-aged man give Ip Man a hand-signal inviting him to attack than he was subjected to Ip Man’s aggressive rain of punches. However, this man was so quick that Ip Man could not match his counter-attack movements. In an instant, Ip Man was forced to withdraw into a corner. The man stopped at the same moment.

After the first contact, and already defeated, Ip Man could not believe that this man had gained the upper hand so quickly. Therefore, he asked the man if he could try again. Once again, Ip Man was completely controlled by this man. He could not do anything against him! This time, Ip Man knew that a real Kung Fu expert had surely beaten him. Without saying a word, Ip Man went away with great disappointment.

After that friendly sparring match, Ip Man was so depressed that he did not even dare to mention that he knew Wing Chun.

However, to Ip Man’s surprise, Lai told Ip that his father’s friend actually praised Ip’s Wing Chun Kung Fu techniques highly. That was why he wanted to see Ip and talk to him again.

Lai started telling Ip Man the secret of his father’s friend. In fact the one who had fought with Ip Man was none other than Leung Bik, the son of Dr. Leung Jan!

After learning the truth, Ip Man thought to himself: “Gosh! That is why he is so good in Wing Chun Kung Fu techniques. Actually this time I was fighting with a high-rank Wing Chun expert!”

Immediately Ip Man’s realized what an opportunity this was. He was still not that highly skilled in the Wing Chun techniques taught to him by his Sifu Wah. This would be the best chance for him to learn the more advanced Wing Chun techniques. Therefore, he wasted no time in asking Lai, his classmate, to take him to the Kung Hang Silk Company to meet Leung Bik.

Since Ip Man was a genius in terms of learning Kung Fu, Leung Bik was very happy to teach all he knew to Ip Man.

A few years later, Leung Bik got tired of living in Hong Kong and was thinking of going back to Foshan. At that time Ip Man had already attained a high proficiency in Wing Chun Kung Fu techniques and started teaching this beautiful art not long after.

Ip Man brought Wing Chun from China to Hong Kong, as did a few other Wing Chun masters, but Ip Man has his doors open to all who wanted to learn including foreigners which was unorthodox at the time. So we can say that its thanks to Ip Man that Wing Chun has flourished in so many parts of the world! 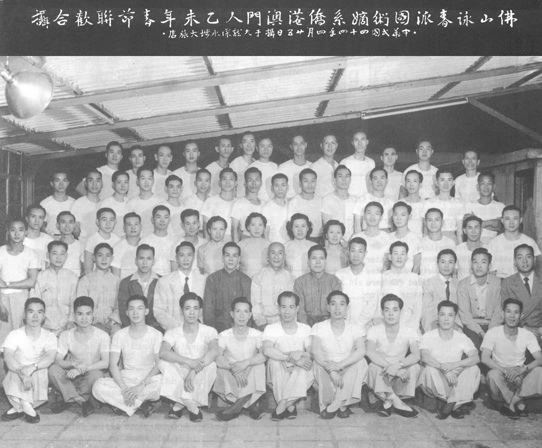