The Wooden Dummy is recognised as the highest skill in Wing Chun. Hence, the majority of Wing Chun learners consider that learning the moves of the Wooden Dummy will automatically make them a good Wing Chun fighter. Some even feel very happy with themselves and boast about their own achievements to the junior learners.

The moves of the Wooden Dummy are all good for fighting. However, those moves are actually formed by the basic movements of Siu Nim Tau, Chum Kiu and Biu Gee. They are not uniquely owned by the Wooden Dummy only. 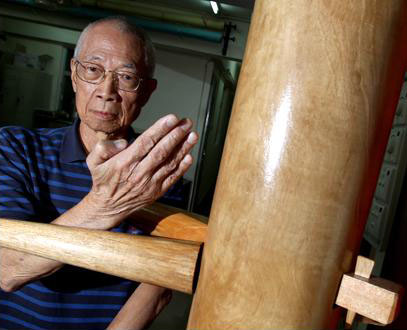 As I said before, if I describe every move of the Wooden Dummy in writing, one will find it difficult to follow and it may even lead him away from the principal goal in practicing the Wooden Dummy. For this reason, I have made up my mind to show you the skill of the forms as well as the Wooden Dummy myself so that you can feel the mysterious and profound skill of Wing Chun Kung Fu.