Literally, Chum Kiu when translated is the method of how to deal with the opponent’s wrists once in contact. In other words, Chum Kiu is the form applicable to fighting. If the theory of Chum Kiu is analysed carefully, it is the acme of the forms.

The purpose of Wing Chun’s Chum Kiu is to utilize the body weight of a person as the source of energy and combining the moves of Siu Nim Tau to create a skill that can apply force in different directions. As a result, the opponent will find it difficult to tackle these kind of moves because his centre of gravity has been affected and will be easily toppled over. Hence, your chance to win in fighting is increased. 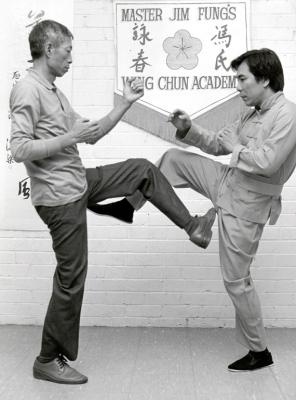 The theory of Chum Kiu can be grouped as follows:

1. The Application of “Two-Way Force"
2. Using the Centre of the Body as the Source of Energy
3. Using the Mind to Control the Movement of the Body
4. Using the Simultaneous Attack and Defence Movements.

The Application of "Two-Way Force"

The majority of the moves in Chum Kiu is to apply the force moving in two different directions to contact with the wrists of the opponent. Although it is called the “two-way force”, if analysed in more detail, it is found that it consists of skill of applying the force pointing from more than two directions.

The turning stance of Chum Kiu is a two-dimensional turning, i.e. turning on a surface. When the turning stance is combined with use of Tau Sau, Bong Sau and Fook Sau of Siu Nim Tau at the same time, every move of Chum Kiu will comprise the effect of having a force pointing from two different directions. Thus, the opponent will find it difficult in dealing with these kind of moves.

I was invited to organise a seminar in Holland in 1994 in which I demonstrated the “two-way force” of Chum Kiu. During the demonstration, I wrestled with a huge young man who could easily lift 250kg. At that time, I weighed only 60 kg. As the body weights vary so greatly, my winning with the use of Chum Kiu obtained the shouts of triumph from everybody present on that occasion.

The reason why the “two-way force” is difficult to deal with is very simple. Assuming that one can easily raise up an object of 50 kg, but if a person pushes you with a force of 20 kg from the side while you are lifting an object of 30 kg then you will find it very difficult to resist the pushing and will even lose your balance and fall over.

2. Using the centre of the body as the source of energy

In practising Chum Kiu, one must use the centre of the body as the source of energy. The purpose is to maintain the body weight as an unity and then every move will contain the weight of the whole body. When the opponent is in contact with any part of your body, he will then have to suffer an attack from your whole body weight.

3. Using the mind to control the movement of the body

The purpose of using the mind to control the movement of the body is to generate the whole body weight without using any unnecessary muscular force. Thus, every move you are using will contain the weight of the whole body.

Practising Chum Kiu has entered into the stage of body contact with the opponent. This means that Chum Kiu is the form which will comprise of the combating skill. Hence, every simple move of Chum Kiu contains a common structure which is fit for attack or defence. Apart from having the speciality of Wing Chun (i.e. not to waste energy), every move will contain the scientific structure for combat, allowing the fighting skill to show up when facing the opponent.

It is of my opinion the fighting skill of Chum Kiu is difficult to describe in writing. The best way is to understand it is through demonstration and practice. If I have to put down all the Chum Kiu skills in writing, the article will be so profound that the person who reads it will find it hard to understand and will be confused.